Coin burning is the process of permanently removing coins from circulation, reducing the total supply.

The amount of BNB coins to be burned is based on the number of trades performed on the exchange within a 3-months period. So after each quarter, Binance burns BNB according to the overall trading volume.

What is a crypto exchange?

Platforms that facilitate the trading of cryptocurrencies for other assets, including digital and fiat currencies. An intermediary between a buyer and a seller. 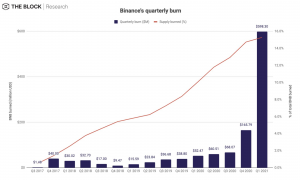 Decentralized cryptocurrency exchanges (DEX) allow users to execute peer-to-peer transactions without the need for a third party or an intermediary (no fiat is exchanged). Airswap, Bancor, and Uniswap are examples of DEXs.

While regulators battle with understanding the cryptocurrency projects such as G999 continue to revolutionize access to services.

GSTrade Exchange powered by the G999 blockchain, a revolutionary new exchange providing a market for buyers and sellers. Link, Paxo Gold, Graph are all additional cryptocurrency pairs that are exchangeable for G999 besides Bitcoin and Ethereum.

Projects such as Uniswap, Bancor, and Compound aim to become market leaders in providing liquidity. The need for centralized and decentralized exchanges continues to increase.

Exclusion Taking The Form of Regulation?

The year is 2017, China banned initial coin offerings and related services. The tone being set forward by Turkey, India and North Macedonia seems similar. This after China had announced its support of Bitcoin in a recent press release stating its usefulness as an investment tool along with the Digital Yuan.

What outcomes have come from regulation?

The future favors the bold

With crackdowns on exchanges and regulations being drafted by central authorities, we are seeing focus directed toward cryptocurrencies. The 2017 Chinese government crackdown on bitcoin users, exchanges, and constant criticisms of market volatility a negative bias toward the digital currency had been felt.

As a peer-to-peer payment system, it seems to favor individual value over the corporate objective. This new ecosystem is indirect competition with fiat currencies in that regard, making it highly unlikely to be adopted in a peaceful fashion.

Since the beginning of bitcoins, large-scale popularism central banks have begun the agenda of Central Bank Digital Currencies. A complete mismatch to the market’s evolution to decentralization. The move of legal bodies to regulate “cryptocurrencies” as “crypto assets seems” malicious. This attempt of Central authorities to maintain power within the market as foolish notions of Central Bank digital currencies. Ironic when the SEC pursues a legal battle with Ripple (XRP) in the same space.

A game of winners and losers

Commodity investors suggest the era of real money returning. With government regulatory bodies cracking down on crypto exchanges and ICOs but praising and championing Central Bank Digital Currencies it is almost certain winners have been chosen.

What is our role as cryptocurrency adopters?
Knowledge is power and our understanding of blockchain technology and incorporation of a free market into our daily lives will strengthen the move away from fiat currencies. We should understand the role of central authorities in a historical context and realize what real money should be.